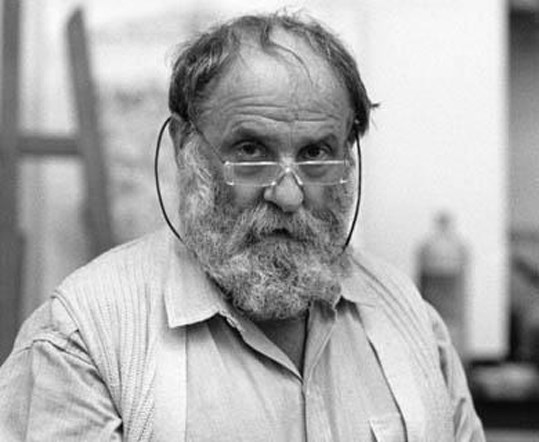 César, “homo faber, homo ludens”, is one of the great French sculptors of the post-war period, whose creative period is well identified with that of the Thirty Glorious. In 1954, he developed the welded irons; in 1959, what Pierre Restany called the «creative gesture» with the compressions; then, will follow the footprints, with among other things the variations on the thumb, his thumb, thumb of a sculptor who never shaped - humor and derision-, in all materials and all dimensions; later in the late 1960s, expansions and pours, and, finally, in 1971, the rare wrappings... Therefore, variations, developments and feedback on these periods, will make this artist «guided by the logic of the material», he said, one of the most important of his generation

It was in 1952, on the advice of friends, that Cesar learned welding and began to create shapes composed of materials recovered in breakage, which allowed him to continue to create for almost nothing, while he was in a difficult financial situation.
This raven belongs to the category of «imaginary animals». The welded iron model was created in 1954 and appears as one of the most dynamic of the corpus composed of about 93 animal models, listed in the catalogue raisonné of Madame Durand Ruel; which authenticated our example (no. archives 466 CRI-89).

It belonged to the Colette Creuzevault collection, daughter of Henri Creuzevault. Inspired by Ambroise Vollard, Henri Creuzevault was specialized in publishing and binding works illustrated by young avant-garde artists such as Henri Laurens, Aristide Maillol and Dufy. With his daughter Colette, after the Second World War he opened a gallery on the Faubourg Saint Honoré, where he exhibited Germaine Richier, then from 1960, César.

From a limited edition of 8 examples started in 1974, this beautiful example was cast by Attilio Valsuani, brother of Claude Valsuani. Attilio settled in Bagneux and was solicited by Despiau or Bourdelle. Synonymous with a high quality of cast, the mark of this founder is much rarer than that of his brother. Our example thus has a beautiful imprint, highlighted by a rich brown patina. This makes it possible to unify the differences in surface textures, which were originally visible on the welded iron model. The edition started by Valsuani was finished by Landowski, who completed it himself with an edition of three examples.

More Works From This Gallery

Hello, thank you for your interest in this piece. How can we assist you?

Thank you for subscribing to MasterArt. Please check your email for further details on how to activate your account.

Thank you for your interest in our gallery. Someone from our team will respond to your enquiry as soon as possible.