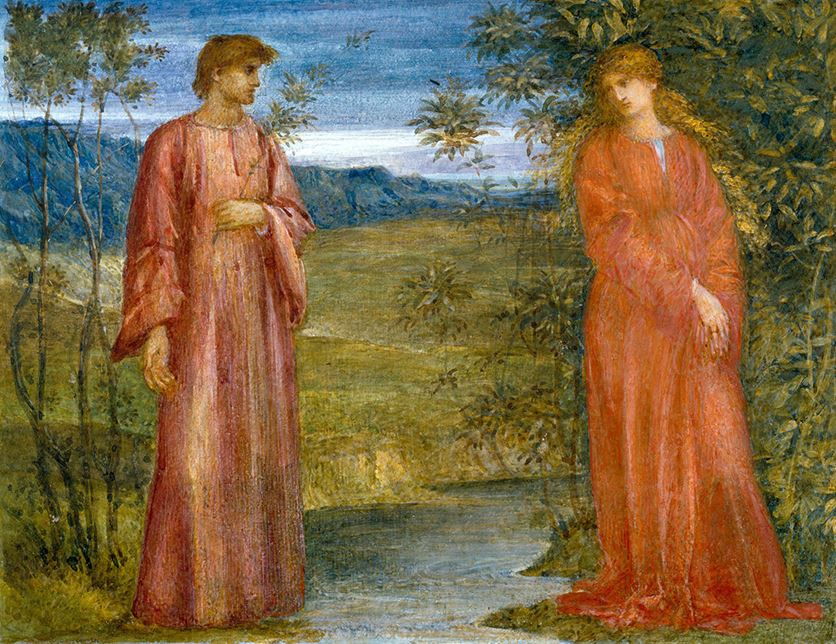 After celebrating its 10th anniversary last year Master Drawings London is returning once again to Mayfair, St. James's and Bloomsbury from the 1 - 8 July 2011. Twentytwo leading drawings specialists from London, New York, Düsseldorf and Madrid open their doors to mount a series of co-ordinated selling exhibitions and lectures in galleries all within walking distance of each other. As ever visitors can expect to see a great range and variety of some of the finest Old Master and Modern drawings on the market by a number of the worlds most distinguished artists.

Stephen Ongpin Fine Art is exhibiting a selection of nineteenth and twentieth century work by artists such as David Hockney (1937), Sir Edward Coley Burne-Jones (1833- 1898), John Frederick Lewis (1804-1876), and Patrick Caulfiled (1936-2005) as well as work from The British School (1850s). A Young Woman from Bursa by the orientalist English painter Lewis portrays his vision of the orient, a work he created during his stay in Bursa in 1841 when it was a centre of the silk trade, populated by peoples of different ethnic origins hailing from the Ottoman territories in Europe.

Lowell Libson is hosting an important loan exhibition of some thirty 18th and 19th century English watercolours and drawings, which serves to highlight the holdings of the National Gallery of Scotland as well as celebrating the publication of the catalogue of the National Gallery's English watercolours. "Masterpieces of English Watercolours and Drawings from the National Gallery of Scotland" includes major landscapes and figure subjects by Blake, Turner, Girtin, Cotman, Gainsborough, Cozens, Constable, Bonington, Rowlandson, Sandby, Cox, Lewis, Palmer and Dadd. Also exhibiting British art is W'S Fine Art, whose annual Summer Exhibition will run throughout July to coincide with Master Drawings London. Amongst the exhibits is a pencil and watercolour drawing by Paul Sandby RA (1725- 1809), entitled George Alexander Stevens and Mrs Paul Sandby.

Founder of Master Drawings London, Crispian Riley-Smith, is showing European drawings including works by Francesco Zuccarelli R.A. (1702-1788), one of the most desired landscape painters of the classicising 18th century, as well as work by Danish academic artist Heinrich Hansen (1821-1890). Theobald Jennings is exhibiting drawings by the twentieth century German printmaker and draftsman Horst Janssen (1929–1995), while American participants Hill-Stone is bringing a variety of European work. Most notable is Two Actors Standing on an Ornamental Platform by Jean-Antoine Watteau (1684–1721) whose brief career spurred the revival of interest in colour and movement as well as the waning Baroque idiom.

Agnew's is planning to show a watercolour entitled Sisteron by J.M.W. Turner (1775- 1851) which illustrates Sisteron, situated in the Basses Alpes on the banks of the Durance, known as the Porte de la Provence. Turner passed through Sisteron twice and was clearly enthralled by the majesty of the mountain ranges which dominate the river and town below, resulting in a number of pencil drawings. The fortress, which is perched on a precipitous rock, became the northern boundary of the domain of the Counts of Provence and was effectively the barrier between the Alps to the north and Provence to the south.

Returning participants C.G. Boerner are bringing a range of drawings from the 16th to the early 20th centuries including a fine selection of drawings by both major and lesser-known German artists.

The week will also provide a first opportunity for many to see Thomas Williams Fine Art's new and greatly expanded exhibition space. Still within their premises on Old Bond Street in a building originally commissioned by the Duveen family, the space has recently been restored to its original purpose for the first time since the 1940s. Their exhibition will include a selection of Italian, Northern and French Old Master drawings.